A few days after the US presidential election of November 8, 2016, Oxford Dictionaries chose “post-truth” as the word of the year, calling the world’s attention to the new concept. However, the concept has been in use for the last twenty five years, first in reference to the media coverage manipulation of the Iran-Contra scandal (Reagan administration) and the first Gulf War (George Bush administration), and later in reference to the misleading statements that led to the invasion of Iraq (George W. Bush administration). The concept has gained particular relevance and became commonplace in the context of the last US presidential elections, which have raised the bar of abuse of truth to new limits. Curiously, or perhaps not so, also within the framework of yet another Republican administration. 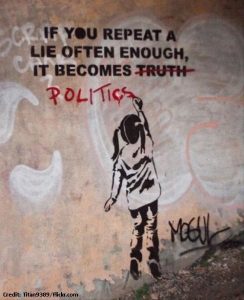 According to Oxford Dictionaries, “post-truth” is an adjective that relates to “circumstances in which objective facts are less influential in shaping public opinion than appeals to emotion and personal belief.” Often associated with the noun “politics” in the expression “post-truth politics,” it is used to express the condition of a historical moment – which is ours – in which personal opinion and scientific fact are mixed up, not only in the formation of individual attitudes and social behavior, but also in political decision-making processes.

Evolution of the frequency of use of the word ‘post-truth’ 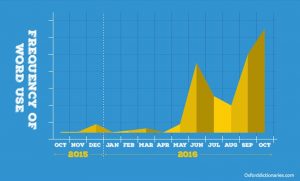 The epistemological origin of the notion of ‘post-truth’ – nowadays associated with a kind of policy that rejects scientific evidence when it contradicts sectarian dogmas – is rooted in the intellectual current that expresses and defines the condition of post-modernity, in which “everything is relevant” and “Shakespeare and Donald Duck have equal value.” In the current social media ecosystem everything is indeed relative and equally “i-relevant” – stories (and tall-stories) are fabricated all the time, there are facts and evidences for all tastes – and there is no stable truth, except the one that each one of us constructs from the mosaic of information of the media ecosystem that one chooses to inhabit. As Barack Obama stated in an interview with The New Yorker magazine, a few days after the election of Trump, in the new media universe dominated by social networks,

“everything is true and nothing is true. An explanation of climate change from a Nobel Prize-winning physicist looks exactly the same on your Facebook page as the denial of climate change by somebody on the Koch brothers’ payroll. And the capacity to disseminate misinformation and wild conspiracy theories (…) has accelerated in ways that much more sharply polarize the electorate and make it very difficult to have a common conversation.”

In the Enlightenment tradition, which we inherited, the public sphere – or, if we will, the place where public opinion potentially becomes political action – is one of the key elements of participatory democracy as we understand it today. The German philosopher and sociologist Jurgen Habermas, who developed the concept, suggested that the mass media are particularly important in shaping and maintaining the public sphere. However, he warned that they are also a privileged vehicle for controlling information flows (for example, by selecting what constitutes news, or not) and can easily be used to manipulate public opinion and change social behavior.

In 1992, Habermas was referring to television and the written press, produced by journalists and communications professionals still relatively bounded by an ethics that regulated the professional milieu. Today, in the online media universe of social networks, the boundary between professional journalistic coverage and user-generated content is almost non-existent. And if on the one hand this greater openness can mean a more democratic public sphere, freer access to a wider range of points of view and sources of information, allowing the creation of communities of interests and strategic alliances, on the other hand the virtual public sphere is also contributing to a culture in which facts and fiction, evidence and opinions, are combined in random variable formations. In this new cultural environment, mediated by the communication flows of the so-called web 2.0, we all lack, above all, a base of stable certainties (“a baseline of facts”) providing a common reference for effective action on fundamental issues. Still in the words of Obama, in the same interview:

“Ideally, in a democracy, everybody would agree that climate change is the consequence of man-made behavior, because that’s what ninety-nine per cent of scientists tell us. And then we would have a debate about how to fix it. That’s how, in the seventies, eighties, and nineties, you had Republicans supporting the Clean Air Act and you had a market-based fix for acid rain rather than a command-and-control approach. So you’d argue about means, but there was a baseline of facts that we could all work off of. And now we just don’t have that.”

Today’s public opinion is fed by multiple narratives about the same facts, many of them contradictory and competing for the status of authenticity, with different narratives directed at different audiences. Social networks act as “echo chambers” of these narratives, expanding the impact in the public sphere of both reliable information and disinformation or factional propaganda. “My opinion is worth more than the facts!” seems to be the motto of the new realpolitik – and it is enough to have a cell phone, a rugged doctrine and a Twitter account to get it widely broadcast. It is a matter of numbers: the amount of “followers” determines the validity of the opinion. Just like the beliefs of dogmatic religions, the more believers there are, the more such beliefs are confirmed by the large numbers. And when the numbers are large enough, opinions and beliefs actually become “alternative facts” that justify personal decisions and universal policy orientations. 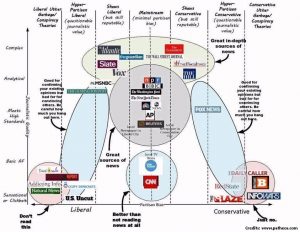 According to British scholar Jayson Harsin, the emergence of this new “post-truth regime” is due to the convergence of a number of factors. These are: (1) the fragmentation of the centralized mass media of the Modern era, which were likely to deliver the same spectrum of news and to reiterate each other; (2) the proliferation of user-generated content and the scarcity of trustworthy authorities, recognized by everybody and capable of telling apart what is true and what is false; (3) a new type of mass communication informed by cognitive science, which seeks to influence the perception of certain population groups (‘microtargeting’), including strategies such as the use of rumors and falsities; (4) the algorithms that rule what appears in the search engines of users based on individual preferences and not necessarily on what is factual; (5) information overload that leads people to ignore important news which do not concern them directly; (6) a political and social environment tainted by scandals and suspicions of corruption and fraud, leading to the discrediting of institutions; and (7) a type of journalism that increasingly tends to spread tabloid-style news and/or pure sectarian propaganda.

All this is bad news for the public sphere. The Enlightenment project set in motion the transition from a system of values ​​based on religious faith and divine law to a system based on reason and the universality of scientific objectivity. At the same time, it attributed to the individual the responsibility to think and judge for him/herself about empirical facts and moral values. On the other hand, the post-structuralist critique of the last thirty years is unanimous in considering that the Enlightenment introduced various forms of “cultural imperialism” which replaced religious belief with another essentialist and dogmatic belief, this time in scientific objectivity and technological progress. The “cultural relativism” of post-modernity, however – despite seeking to accommodate the various identitarian positions of contemporary society (or precisely because of this) – has been responsible for an hyper-fragmentation of the political-social body and, consequently, the public sphere. In this regard, we have reached a deadlock particularly hard to overcome.

Opposing this shattering relativism, the recent so-called “populist” power formations – which are now reclaiming the political grounds of class struggle abandoned by the traditional Left – have found their unifying theme in globalization. Issues such as emigration and trade treaties between economic blocs are a common frame of reference – “a baseline of facts” – capable of mobilizing the discontent not only of chauvinists and fanatics but also of broad sectors of the middle class in Western democracies: regular citizens who see globalization as a threat to the self-government of nations, to the diversity of local cultures, to job opportunities, and to the social rights conquered since the post-war period.

The unthinkable victory of Trump, the unexpected Brexit, the growing power of Putin’s oligarchy, and the rise of the radical right in Europe are inseparable phenomena from the new post-truth regimes that have infiltrated democracy and seem to announce the advent of a new anti-Enlightenment and post-democratic era. They also make one wonder what drives a significant number of supposedly cultured and intelligent people to reject facts about which there is a broad scientific consensus. In order to explain this question, American sociologists have been conducting studies that allow us to conclude that people simply tend to select the news that confirm what they already believe and to consider as more relevant the facts that corroborate their opinions. When the facts contradict their opinions, they do not necessarily deny the facts, but tend to minimize them by saying that they are less relevant.

Exacerbating the problem, in the new post-truth regime scientific objectivity is also called into question. Given the current profusion of scientific communications, many of them contradictory, the facts of science are being selectively used in a struggle for cultural supremacy, involving the manipulation and control of the public sphere. Certain scientific conclusions – for example on climate change, human rights or nuclear safety – are increasingly associated with particular political or social affiliations. However, such matters are far too important to be dependent on opinion criteria or party preferences. When what is at stake is the possibility (or not) of a viable future for humanity and the planet, there are facts and truths that are universal and inescapable. In order to refute and combat the totalitarian drift of post-truth regimes, it is the responsibility of journalists and reporters, but also researchers and scientists, to start conveying this message more effectively.

*Luis Balula (PhD. Urban Planning & Public Policy) is an independent consultant and researcher at the University of Lisbon.